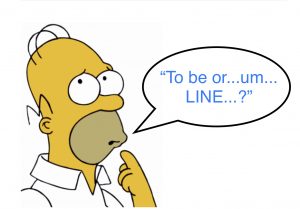 The problem with rote memorization.

Words that come from rote repetition and/or planning are stuck in the dance of that repetition.

Ever feel stuck? Not directable? You’ve got those lines down, but you can’t seem to break out of the way you’re speaking and behaving, no matter what the director does?

That’s probably because you ran those lines over and over without really having any meaning attached to them. They’re just sounds.

In other words, you might have those lines down backwards and forwards but you have no idea what you’re actually communicating or responding to, so…who cares? We don’t feel your experience because you don’t feel anything except making sure you got those words right.

Why do words come flying out of our mouths in real life?

Actors aren’t saying lines because they are written on the page. (I mean, yes, sure, but…) You’re saying them because you (the character) are really trying to communicate something.

Neither do the words in the script. This person speaks this way for a reason. You have to explore those reasons and let them live in your body like your own words.

Words that come from meaning and history can be flexible in the moment.

So how can we be sure we’ve got those words in our bodies and fully live as the character so that we feel free to just play?

How to memorize meaningfully.

Read it out loud and explore history.

Read the scene out loud – all of it, both parts and the stage directions. Not to act it, just to let your instinct pick up on the emotional experience of the character.

Begin to playfully explore specific history for your character’s relationships.

Read the scene out loud again to discover another important relationship or build on one you’re already exploring. (No, don’t act it out. Just feel and discover.)

Read it out loud again…

As you do this, you are saying the words multiple times, but with the focus of creating meaning for those words through the character’s history. So you still get to say the words out loud a lot, but you’re not focused on memorization. This is much more effective way to get the words in your body because they have meaning to you, your history, and what you’re fighting for.

Our conversations don’t happen in a vacuum. Everything we say or do in a conversation is because of what was just said or done to us. So ask this very important question:

Not in a global context; the answer can’t just be “My character is angry.” Ask literally why right now? What did they just say/do? Why is that a trigger? Make it a trigger.

For example: If your character suddenly gets angry because the other person says, “You’re being ridiculous,” you can put history behind this word. Maybe they’ve used it multiple times in the past with you and you’ve just held your tongue…until now. Maybe they have only used it in the past referring to people they don’t like and now they’re using it with you for the first time.

When you give meaning (explore past history) to what they say/do, their words and actions will have a more organic impact on what you say/do in the moment.

(PS: Review “Breaking Down A Script” for more help with this.)

Pay attention to context for monologues/speeches.

Monologues are made up of a series of different messages. Between the messages are brief silences (aka: beats or transitions). You’re moving from one to the other because of what you just said (or did). Or because the other person just had a non-verbal reaction to you.

Break down your monologue by messages and then ask why you’re moving from one message to the next one in that order. What are you trying to get across to the other person? Why do your messages come out in the order that they do?

Use the language from the script in a different context when you explore conversations in your history.

Chances are, your character has used the language in the scene in their past before. So when you’re exploring your history, you can use the same language, but with a different person and with a different need.

For example: Let’s assume in the scene you’re confronting your significant other, Suzanne. The line is:

“I texted you on Tuesday and you said you were busy and you’d get right back to me. Then I didn’t hear from you until the following week. I feel like you don’t even care.”

“I texted her on Tuesday and she said she was busy and that she’d get right back to me. Then I didn’t hear from her until the following week. I feel like she doesn’t even care.”

Do this a couple of times with different people.

You’re telling Josiah what happened because you need him to comfort you, right? But later when you talk to Suzanne, your need will be different – to get her to feel bad and to apologize.

SO. You’re not running your lines, but you are saying the words out loud multiple times. And you’re doing it in a different relationship with a different need, so it can’t possibly come out the same later.

Run the scene with a friend or app just to see where you trip up. (Don’t “act” it; just go with how you feel in the moment.) Catch yourself when you do trip up and then consider:

1) Did you get specific about what you and/or what the other person is saying? If you haven’t, go ahead and make some memories attached to those words or actions.

When you do decide to run your lines, don’t just stand there and run them. Instead, do your laundry, wash your dishes, sweep the floor. Change up the activity that you’re doing when you run them. This way, you get them in your body, but your body doesn’t get stuck in the same dance for how you’re communicating.